Prolific doesn’t even come close. Pablo Ruiz Picasso was an endless well of creativity. He did things that predict and predate art movements and styles decades before they are fully realized by following generations of artists. Picasso Sculpture on now at The Museum of Modern Art in New York highlights; that 43 years after his death, he is still teaching us a thing or two about combining a thing or two.

The show is a marvel of objects collected from every phase of his career. Cubism has it’s rightful place along with many of his other styles. There was even an area showcasing all of the maquettes he developed for his large public works. 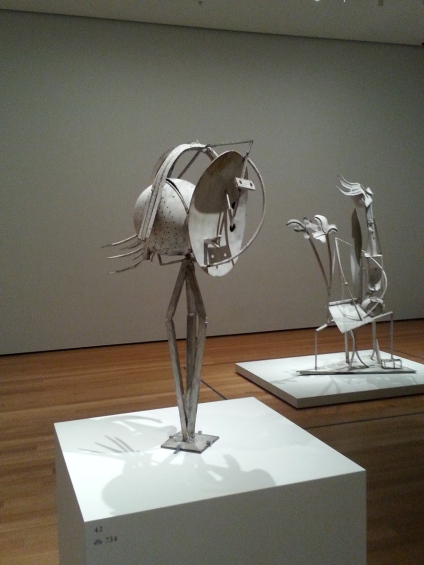 Picasso approached sculpture the same way he approached painting. He is at his best when he combines unexpected elements into alarming results along with capturing the essence of something with what looks like very little effort.

The best example of this I can point out is his Bull’s Head made from a bicycle seat and handle bars. The concept is mischievously simple but it’s impact is enormous. It has elements of the readymade and the combine all the while screaming Picasso.

This was a great survey of one of the titans of Modern Art that delighted as much as it enlightened. On until Feb 7th.