“I like this one. One dog goes one way and the other goes the other.” : Paintings in the Movies 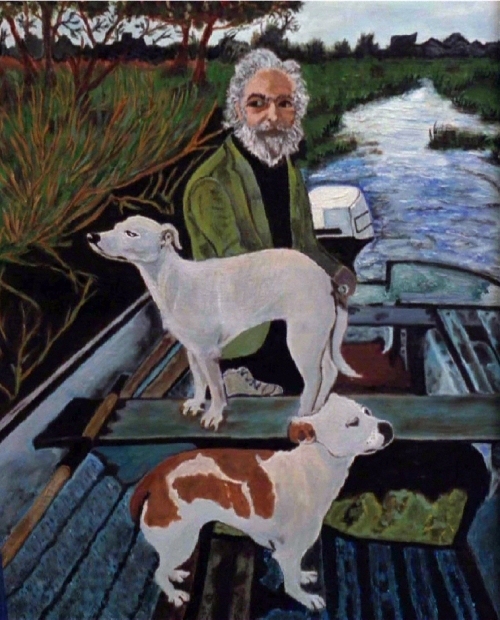 Summer is the perfect time to re-watch a classic, here’s a repost to wet your appetite.

I believe Martin Scorsese’s GoodFellas may be as close to perfect as a movie gets. It’s got a compelling arc based on a true story, brilliant performances, fantastic soundtrack, style for days, and of course this little piece of outsider art. The painting itself is based on a photo that appeared in a 1978 issue of National Geographic and was painted by the mother of the author of Wise Guy: Nicholas Pileggi. Wise Guy is the story of Henry Hill’s life in the mob and the basis for GoodFellas. The painting itself has no real bearing on the plot of the movie, but rather plays a delightful role in an impromptu meal during the wee hours of the night; between a boy, his friends and his mother.  Scorsese masterfully juxtaposes the sweet tender caring of an elderly mother (played by his own mother) with the ruthless cold-hearted apathy of a group of killers whose next victim is locked in the trunk of their car. Scorsese says the scene was mostly improvised with the only line written in the script being: –mother shows the ‘dog’ painting.

A painting that had a much more significant role in a film would  have to be the double-sided Kandinsky that appears in Six Degrees of Separation. In real life Kandinsky never painted a double-sided work. The filmmakers combined existing works from two of his radically different styles to illustrate the fine line between chaos and control. The painting symbolizes the fleeting grasp the central characters have on the story of their lives. A young grifter cons his way into the lavish lives of an affluent couple on the Upper East Side.  By the end of the film, it is a blur as to who is using who: the grifter getting a taste of the sweet life or the couple endlessly milking their “near death” anecdote that makes them the life of the  party.

The Upper East Side is also the location for an art collection of truly epic television proportions. Gossip Girl finally ended its’ six season run last year; closing the elevator door on the lives of some truly two dimensional characters. If you are wondering why Gossip Girl is included here? The answer is that the producers had wonderful taste: in music, ridiculous plot-lines that went nowhere and surprisingly enough -art. Multiple paintings by Richard Phillips could be found along with this little gem. Prada Marfa refers to the small roadside replica  Prada store created by artists Elmgreen and Dragset sixty miles outside of Marfa Texas. Another reason this show should be included in a post with GoodFellas: Dorota. Who else could be the maid for both Blair Waldorf and Tony Soprano?

Badroute is the name of this painting by Miguel Calderon. It is owned by Wes Anderson and appears in his film The Royal Tenenbaums. I am a fan of Anderson and believe this to be his best picture.  It was co-written with Owen Wilson and stars Gene Hackman, Anjelica Huston and Bill Murray. The premise: all grown-up child prodigies once again find themselves  under the same roof trying to come to grips with their eccentric family dynamics.

To say Elwood P Dowd is eccentric would be a little bit of an understatement. Elwood has an unusual friend; a six foot invisible rabbit named Harvey. Jimmy Stewart plays a wonderful drunk who sees the world through rose coloured glasses with the help of his friend. Harvey is meant to be a pooka or a mischievous spirit from Celtic folklore. The only time we get to see what Harvey looks like is when Elwood brings home this painting. The image is fantastic and so is the movie.

A movie that is a real secret gem is David Salle’s Search and Destroy. The film was produced by Martin Scorsese and stars Christopher Walken, John Turturro, Illena Douglas, Ethan Hawke and Dennis Hopper. A failed businessman has plans for turning a self-help book into a movie. Trying to secure his finances turns into more than he bargains for. David Salle was known predominantly as a painter and his painterly style is reflected throughout the film. A wonderful example of this is the Alex Katz that hangs in Christopher Walken’s office.

I tried to focus on paintings that were unique to these individual films and show. Sorry no Sunday Afternoon on the Island of La Grande Jatte from Ferris Beuller’s Day Off.  At the end of the day, this would be a gallery show I’d like to go see.

One Comment to ““I like this one. One dog goes one way and the other goes the other.” : Paintings in the Movies”