Two more theatrical artists you’ll never find. Both achieved international super stardom in their lifetimes. They became that very rare species: artist celebrity. Today your average person would be hard pressed to name a living artist. Not even our so called art celebrities like Jeff Koons, Damien Hirst or Matthew Barney pull that much weight in a world of Justin Biebers and Lady Gagas.  Salvador Dali and Andy Warhol were and are to this day household names. Pretty good for guys who painted melting clocks and Campbell‘s soup cans, but who is the greater artist?

Before the ants, crutches and barren landscapes of the subconscious shifted everyone’s perceptions of reality; there was a young Spanish art student born in 1904 in the North Western corner of Spain named Salvador. Dali exhibited a master’s talent from an early age and as a youth he attended a prestigious art academy in Madrid, but dropped out (or was expelled) before completion; citing he was better than all his instructors. A controversial move but a correct one. From an early age Dali understood his place in the universe and wouldn’t be satisfied unless he was the center of it.

Andrew Warhola was born in Pittsburgh in 1928. Andy Warhol was born in New York city in  1949. By the fifties, the once shy and frail bed ridden boy had reinvented himself as the most sought after illustrator in New York. His inkblot drawing style was both elegant and whimsical and proved irresistible to magazine editors. Although Andy was at the top of his field he yearned to be considered a real artist.

Dali The Persistence of Memory 1931

Introduced to Surrealism in the late 1920’s Dali soon became its most visible proponent. Although he would later reject its staunch confides, it is the movement most associated with him. An early work and probably one of the most recognizable artworks on the planet The Persistence of Memory does exactly what its title connotates. The dream world of the subconscious rocks the viewer into a whole new way of seeing. In my opinion this is Dali’s crowing achievement and possibly one of the act of painting’s crowning achievements.

Andy may have never painted anything as seminal as The Persistence of Memory but he had a gift of transforming everything he painted. He elevated the banal to the iconic. The greatest example of this would be his soup cans. 32 hand painted still-lifes arranged in a pattern (originally shown as a long row, now a grid). The power of subtle change and repetition is undeniable. When first exhibited in California only one sold to the actor Dennis Hopper. Later it was returned to maintain all 32 as a single work. The effect they had was stupefying. They questioned what could be considered  art and flew directly in the face of the godfathers of American art the Abstract Expressionists. Materialism and Pop culture were meant to be condemned  not exonerated in the halls of fine art but Andy could see the future, and not only recognized the power of Pop but helped push it over the edge. 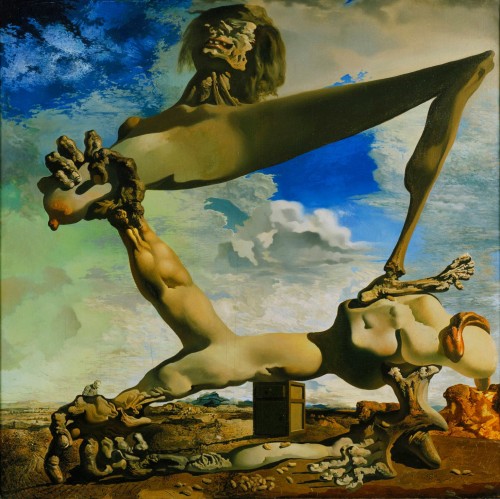 As interesting as Surrealism is, it can’t compete with the juggernaut that is Pop, but Pop too has its limitations. Pop’s subject matter will always be itself, it’s like a snake swallowing its tail. Dali could use Surrealism to its full advantage and utilized its storytelling ability to comment on the political unrest of his beloved Spain. The late great art critic Robert Hughes said that Dali’s Premonition of War was one of the greatest comments on war ever depicted, even eclipsing Picasso’s Guernica. I don’t know if I’d go that far, but the anguish and tension is palatable. 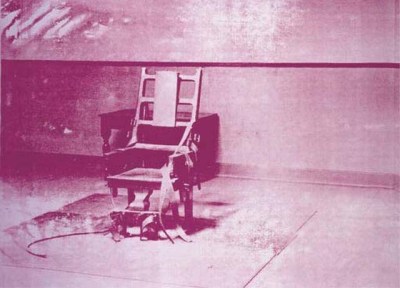 At his best, Warhol transcended Pop and even appropriated his own working methods to delve deeper into the human condition than celebrities or cow wallpaper. By the 60’s Warhol had set up his Factory and adopted silk-screening as his number one working method. It provided him an easy way to repeat an image as  opposed to the tedious and laborious method of hand painting he used for his soup cans. Utilizing a bevy of assistants and quick working methods, Warhol’s production went into high gear. He later expanded his art into the movies, publishing and sculpture. Not all of it was stellar but it demonstrated his endless creativity, proving he didn’t like to stay in the same place for very long.

Dali at his best, transformed the way we see the world and at his worst, his paintings became cheap parlor tricks that turned into optical illusions that are better suited for the walls of a dormitory rather than a museum. Unfortunately near the end of his career Dali became a caricature of his former self. He notoriously signed a stack of blank paper that became countless forgeries. The art market was awash with fake Dalis with real signatures.

Warhol himself didn’t even sign half his work, he got his mom to do it for him. His portraits became a formula, starting with a simple Polaroid passed to assistants then silk-screened with Andy doing as little as collecting the fee which was $50 thousand a pop. The commercialization of his art is both his worst failure and his greatest accomplishment. His example has been followed by countless others that came after him. His influence is immense, but it would be dismissive to underestimate his contribution to the canon of art history. Andy Warhol changed the way we perceive process, culture and ultimately art and that is no small accomplishment.