One was a master of stone, the other a master of colour. Both lived well into their eighties and both were  considered to be the greatest living artist in their lifetimes. Their chief rivals were Leonardo da Vinci and Pablo Picasso respectively.  Michelangelo Buonarroti was asked by the pope to put down his chisel and pick up a paint brush (against his will) and Henri Matisse was forced (by illness) to put down his paint brush and pick up a pair of scissors. They both rose to the new challenge and  left behind some of the greatest artwork the world has ever known. Their masterpieces are nothing short of iconic, but who is the greater artist?

For me, Matisse’s Red Studio is one of the greatest paintings painted by anybody ever. It hangs in New York’s Museum of Modern Art beside another one of his great works The Piano Lesson.  It simultaneously shows space and negates it at the same time. It is mischievously simple and all together complex. The drawing is sumptuous and the use of colour totally avant garde. The abstract expressionist Mark Rothko was completely put under its spell, influencing countless of his own works. It draws you in with its joyous objects, sculptures and paintings scattered around the room, but it also keeps you out by its flat use of red reminding us that this is a place of serious work. Matisse rewrote the book on painting.

It is hard to believe after looking at a picture like Doni Tondo or The Holy Family by Michelangelo, that he didn’t consider himself a painter. His handling of value and composition are nothing short of masterful. His figures feel as though they could take a breath, (although somehow the female form completely alluded him). He is a grand storyteller conveying deep emotions with a simple tilt of the head or the direction of the gaze. We follow those eyes because we believe those eyes. These figures seem real but at the same time other worldly. Michelangelo tests our faith and asks to believe.

Matisse also asks us to believe. We can see the reflection of a goldfish on the surface of water with a single orange brushstroke. He has condensed our senses to a dash of pure colour and nudged our perception to a flawless execution. We are rendered children in their presence. 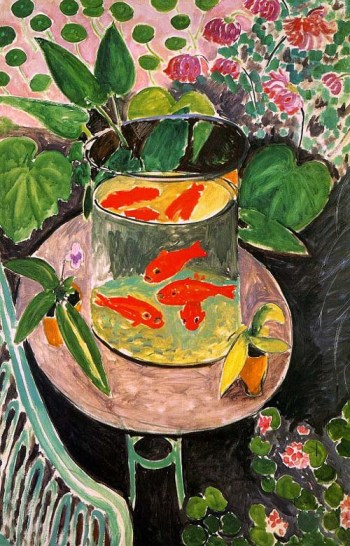 Matisse is renown for his use of colour. He liked to use large swatches of pure colour. He believed in the axiom  ‘a kilogram of green is greener than half kilogram of green’. He also offsets his colours with both black and white, which creates great contrast as well as balances the palette. In Goldfish Matisse applies the paint loose and transparent with no real consideration for actual space preferring rhythm and pattern.

Michelangelo believed every piece of stone contained a sculpture waiting to be freed. You can see this process in his series of unfinished slaves. 5 centuries later we are fortunate that timing and dwindling funds forced Michelangelo to abandon his plans and work for the tomb of Pope Julius. The original plan called for 30 slaves in total with only two ever being completed and another 4 partially started. They illustrate the act of creation and serve as a masterclass for sculptors everywhere.

Throughout his career Matisse slowly reduced his figures to shape and flat colour. He eliminated the detail and emphasized the gesture. His cut-outs were the perfect culmination of this and for me some of his strongest work. Many artists peak  young and spend the rest of their lives imitating themselves, never again being able to recapture that younger vitality. Matisse is one of those rare individuals who was prolific throughout his career. Made near the end of his life with scissors and sheets of painted paper, the cut-outs are simply exquisite. 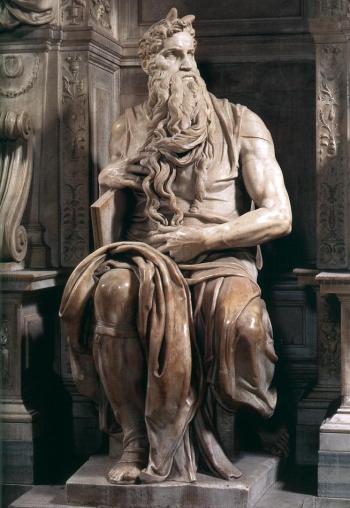 As the story goes:  after Michelangelo completed Moses, he slapped him on the knee and commanded him to speak. It is true that stone was transformed by his chisel into something more. We are so humbled by their presence, that it is almost unfathomable that a person could actually create them. We are in such awe of his talent, we have trouble taking in the work. Embarrassing as this is; it was years before I noticed the horns on top of Moses‘s head. I was too busy marveling at his hands, his feet, his expression, the drapery and so on.

Matisse The Beasts of the Sea 1950

As much as I love Matisse and I love Matisse, he’s no match for the Italian. The work of Michelangelo is so impressive,  you can’t do anything but stop and take notice of it. I didn’t even mention David or The Sistine Chapel, but don’t worry their time will come.

We have now come to the end of the first 8 match-ups and the winners are poised to face off in the next round. So far, the bracket looks like this:

2 Comments to “W.T.G.A.: Michelangelo vs Matisse”